The Sapporo Snow Festival, or Yuki Matsuri as it is also known, is one of Japan’s biggest annual events, with the number of visitors to the area during the week-long festival peaking at over two million. Japanese nationals make up the majority of visitors, but with the ever expanding popularity of Japan’s ski resorts, more and more international visitors are coinciding their trips with the Sapporo Snow Festival.

The size of the festival currently puts it in the top three largest snow festivals in the world; only falling behind the Quebec Winter Carnival, and Harbin International Ice and Snow Sculpture Festival. With both train and bus connections from Niseko and New Chitose Airport, it has bever been easier to visit Sapporo, and we strongly recommend taking at least a day trip to see the sites and absorb the magical atmosphere. 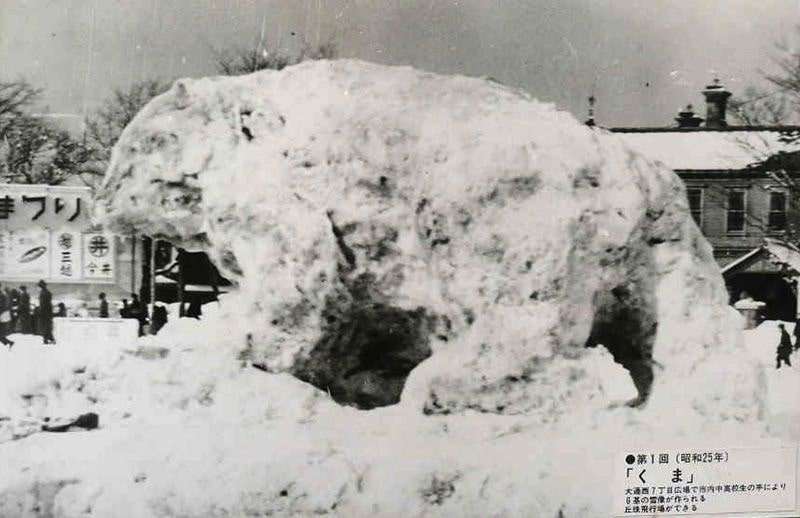 The Sapporo Snow Festival was started in 1950 as part of a small event, including several sculptures, snowball fights and a carnival. The first ever sculptures were created in Odori Park by several middle and high school students and mark the very modest beginnings of the festival. By all accounts, expectations for the event were not high, but over 50,000 people ended up attending, and an annual event was created. Slowly but surely the festival grew in popularity and in 1955, the Japan Defence Force joined the festivities, aiming to create the largest sculpture they could.

With the overwhelming growth of the event, both popularity wise and by the size of the sculptures, more and more snow has been required. To this day the JDS are still involved in the festival, as part of their training, and are tasked with shipping in snow from other locations.

The event gained nationwide recognition in 1959, when on the 10th anniversary of the event, clips were broadcast on TV for the first time, coinciding with articles appearing in national newspapers. Tourists came from all over Japan to experience the snow sculptures first hand, and the solidifying of the event into the national calendar was complete. The Olympics in 1972, also hosted in Sapporo, brought international attention. The official slogan of the Sapporo Snow Festival that year was “Welcome to Sapporo”, and the infrastructure that came with the Olympics helped thousands of international tourists experience the festival for the first time.

In subsequent years, sculptures paying tribute to international destinations with close contacts to Sapporo were also erected, with the aim to create a truly international experience. From this moment, the Sapporo Snow Festival has gone from strength to strength and now spans over several locations, hosts many smaller events and welcomes visitors from all over the world. 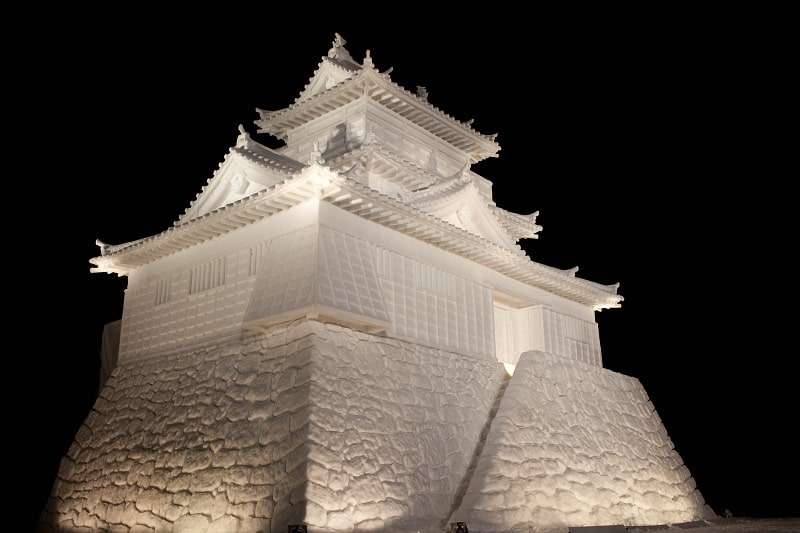 The main attraction of the Sapporo Snow Festival is of course the snow sculptures, the largest of which are a staggering 15 metres tall, which is still 10 metres short of the largest “Gulliver” sculpture built in 1972! In total, 30,000 tonnes of snow is carried in from surrounding areas, and construction of the roughly 200 sculptures can last between 2 to 4 weeks. The different areas of the festival contain different attractions, but most people start at the Odori Park site.

The park extends 1.7km through the middle of Sapporo and visitors are recommended to spend between an hour to an hour and a half strolling around and taking in the sites. At night sculptures are illuminated creating a winter wonderland, so make sure to bring your camera? Complete the experience by taking a trip up the Sapporo TV tower, at the east end of the park. From here you can see all the way down the illuminated festival site and take in the evening view of the City. 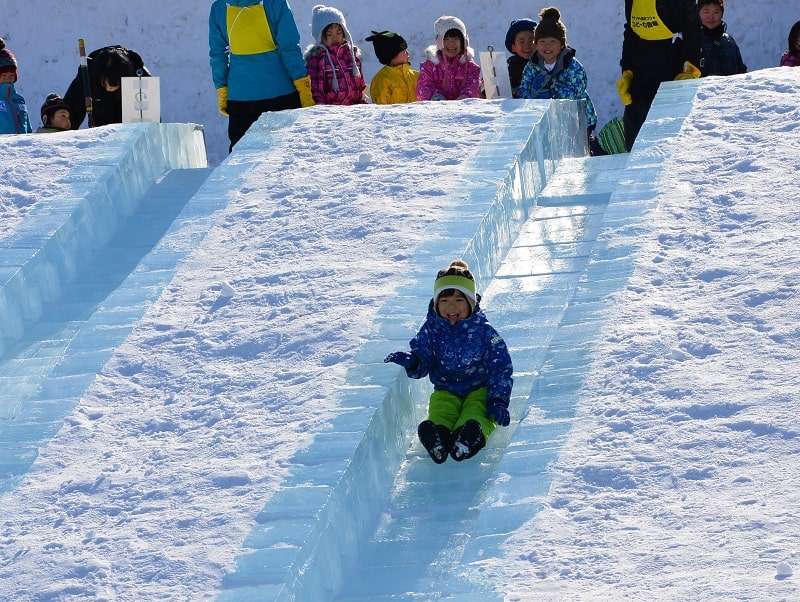 The Sapporo Snow Festival comes into its own for families with children, who should definitely head to the Tsudome Site. This area has large snow slides, tunnel slides and snow tubing which can be enjoyed by both children and adults! Kids will love to explore Waku Waku Snow Park and discover the huge range of activities, from ice glass making to snow kick boarding and having zany photos taken in the snow.

There is a large indoor rest area which hosts a huge range of indoor events, and where you can grab a drink, take a quick breather and warm yourselves up. This area of the Sapporo Snow Festival hosts an array of giant Winter themed soft play attractions including bouncy castles, climbing volcanoes, a giant inflatable slide and an epic bouncy assault course. A haven for energetic snow loving kids! 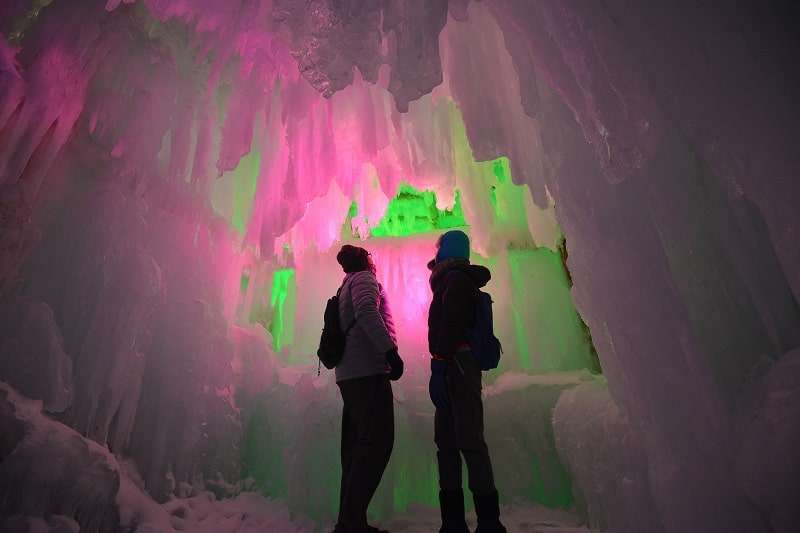 Weather in Hokkaido during the Sapporo Snow Festival is cold and goes as far as very cold! While Sapporo does tend to avoid the harshest weather conditions, temperatures usually sit well below freezing during the evening, and rarely go above during the day time. It is important to dress appropriately to be able to fully enjoy the festival. At least three layers of clothing are recommended, along with good gloves and a hat. The most essential item though is a good pair of boots. Sapporo can be completely covered in snow, and any sneakers of training are likely to get very wet very quickly, which is sure to ruin your evening! 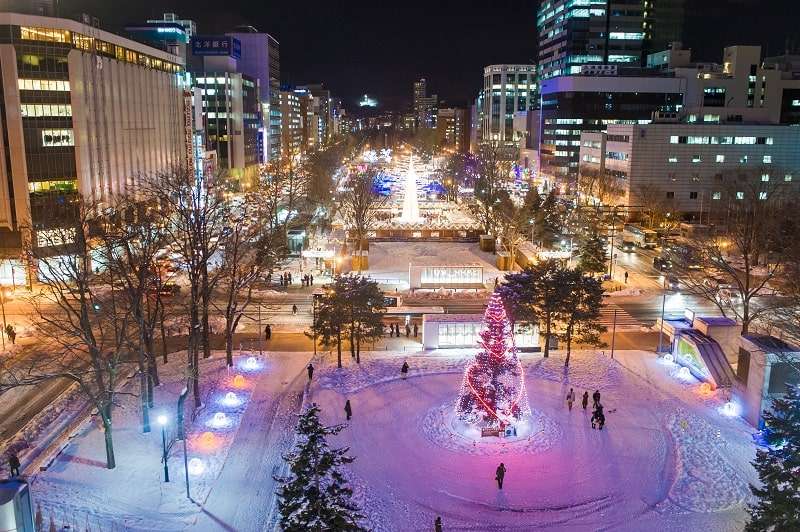 The Odori site of the Sapporo Snow Festival sits in downtown, nestled in between Sapporo Station and the famous Susukino areas. While walking between the three is definitely possible, and there are even underground shopping walkways linking all, subway lines are also available for those with tired legs. The Tsudome site is a little further afield, but again subway and bus links make getting there no problem at all. Note public parking is extremely limited at both venues, and using public transport is recommended. 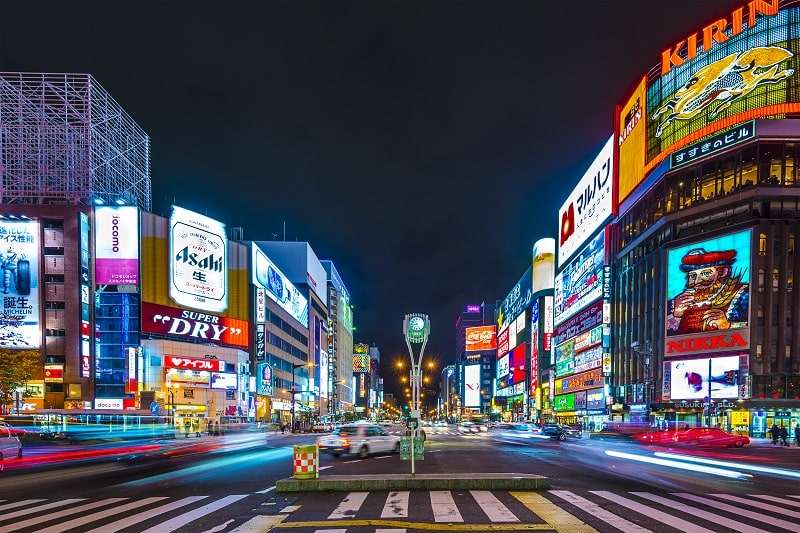 While you are at the Sapporo Snow Festival, why not take advantage of the city while you are there? Spending one night here ensures you have the chance to see all the festival has to offer and still have time to sample some of the amazing food and drink on offer. Food stalls are scattered around the festival, which are great for people looking to sample a wide variety of food. For people who want a more comfortable experience, Sapporo has everything from piping hot miso ramen, through to world-class crab and sashimi. Hokkaido cuisine is certainly not to be missed.

Head to Susukino, a bustling nightlife metropolis, filled with bars and restaurants; from relaxed Japanese style izakayas through to Japanese fine dining and child friendly restaurants, there is something for everyone.

Beer enthusiasts should head to the Sapporo Beer Museum, home to one of Japan’s most famous brands. Tours here are free and worth taking, but the real gem is in the Genghis Khan Food Hall! A specific kind of yakiniku (grilled meat), native to Hokkaido, Genghis Khan is a must-try experience. All you can eat and drink menus are available for those who really want to indulge!