Why Does it Snow So Much in Japan Anyway?

Perhaps you’ve heard of the famous novel entitled Snow Country by Yasunari Kawabata; the backdrop, Japan’s Niigata prefecture in the dead of winter, becomes as much of a character in the novel as its star-crossed lovers, geisha Komako and her wealthy patron Shimamura. Niigata forever kept its Snow Country nickname thanks to the fame of the novel, but also because it perfectly describes the region (an area nestled between the Sea of Japan on one side and the Japanese Alps on the other) and the special weather effect (also named Japan ocean effect) which occurs there, resulting in an unnatural abundance of snowfall over the winter months. The founder of Japan Ski Experience and its Directors were lucky enough to have spent close to half a decade each living deep in Japan’s Snow Country, and (at that time) had the snow-shoveling physiques to prove it! 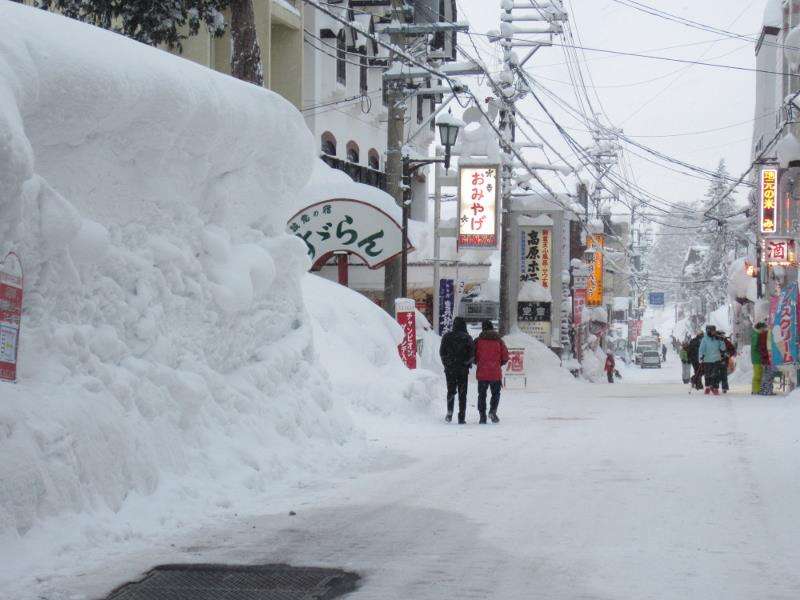 What is this special Japan weather effect?

Picture Siberia across the Sea of Japan. Vast, close, and cold. The arctic winds from Siberia travel across the Sea of Japan picking up moisture along the way. The mixture of the cold wind and wet conditions turn it into snowfall by the time it reaches the north side of Japan, in a stretch of the country flanked on one side by the Japan Sea and the other side by the Japan Alps. This effect creates an abundance of fresh snowfall.

In many parts of northern Japan, the accumulated snowfall can be so deep that houses are built to accommodate for this: houses sit on top of a concrete base with a walk up to the front door, many houses have special ‘roof access’ doors to enable easy access to the roof to shovel off any accumulated snow to prevent cave-ins. As the snow continues to fall, ‘snow tunnels’ begin to form on either side of the narrow streets from the ever increasing heights of the snow banks. Even for those who come from very wintry places and who are used to seeing extreme winter conditions are astonished to see the incredible amount of snow which accumulates over the winter months. The Japan snowfall really is a site to behold! How much snow does Japan get?

This special weather effect does not just mean that northern Japan receives an abundance of snow…it also means that unlike most other ski areas in the world, Japan also benefits from getting consistent almost daily snowfall, year on year. It is often noted that even a ‘bad’ season in the Japan ski resorts is usually comparable if not better than the best seasons in Europe ski resorts in terms of the amount of snowfall. What about the powder snow?

Obviously the further north you go in Japan, the colder it is. This means that the heavy dumps of snow you see on the mainland get increasingly dryer and more powdery the higher up you go. And that’s why some of the more northern Japan ski resorts such as Niseko, Furano, Kiroro and Rusutsu are world-renowned not only for the quantity, but also the quality of powder snow. When you mix the three things together – quantity, consistency, and quality – you really find something special. And although the Hokkaido ski resorts offer incredible snow conditions and give you some of the best skiing in Japan, don’t write off the mainland resorts such as Hakuba just yet. The 10 Hakuba Valley ski resorts are nestled within the Japan Alps, meaning they’re much higher up than the Niseko ski resorts. As such, powder snow lovers can find a ton of the untouched white stuff in the Hakuba Valley as well.